This user’s case demonstrates how you can use multichannel campaign management to improve your customers’ journeys.

A fictitious fashion retailer, Madison Island Fashion, (based on the Magento Demo Store) plans to open a new store in London. Marketing is tasked with drumming up interest for the opening event. The marketing team plans an automated multichannel campaign that should trigger certain activities based on customer behaviour along their journey. 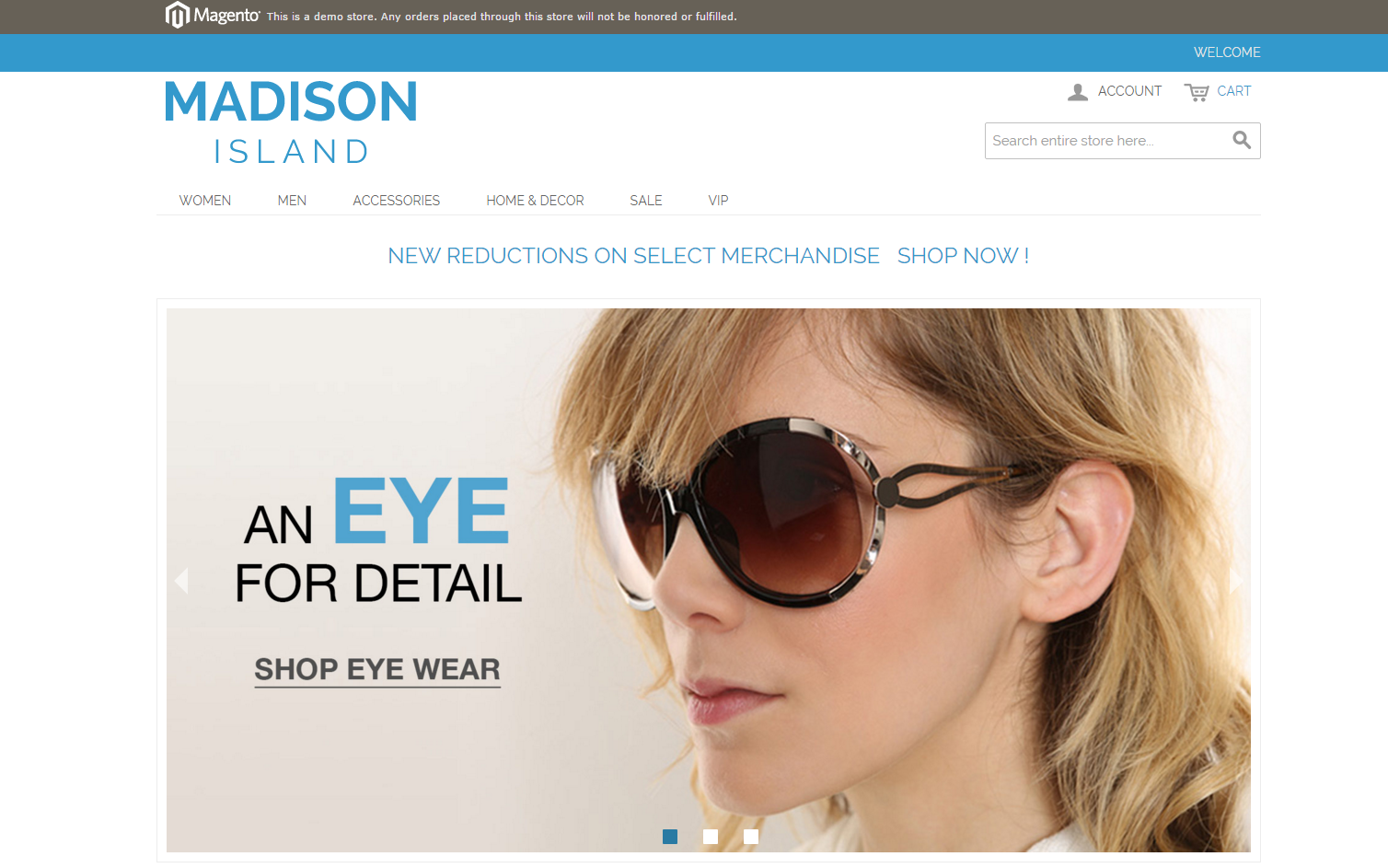 The new store opening campaign contains four main campaign steps, each including different channel communications. Firstly, Madison Island plans a Facebook awareness campaign for the new store, followed by a postcard mailing to customers and prospects living in the catchment area with an introductory money-off voucher. On the day of the store opening, visitors who come into the store should be welcomed by a triggered mobile push notification. Those that don’t have the time to visit on the day should receive an email with an offer and a prize draw. Finally, a follow-up step must take place, based on a three way behavioural split resulting in three tailored messages. 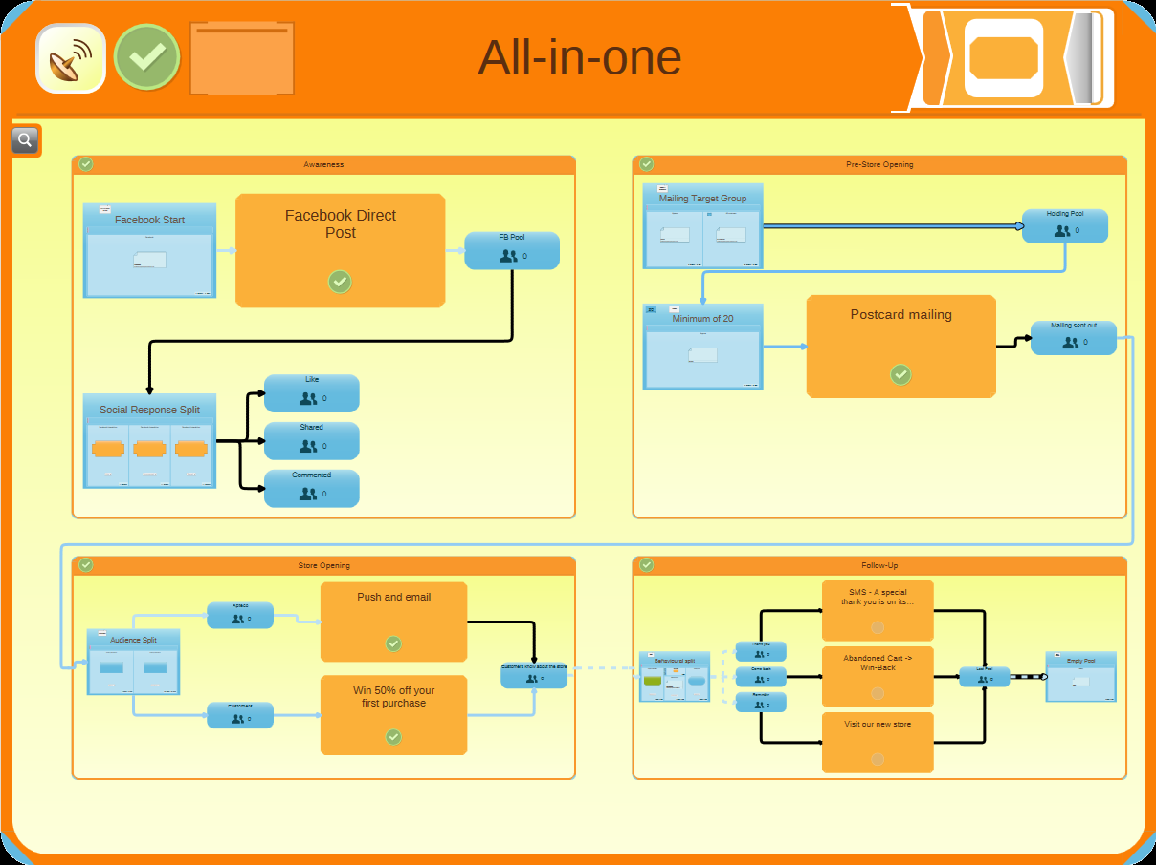 In the first step Madison Island plans a Facebook post that is designed to create awareness of the new store opening and to stimulate engagement. The following screenshot shows the creation and delivery step in the campaign, followed by a three-way split based on social responses: ‘Like’, ‘Shared’ and ‘Commented’ (useful for further Facebook activities). 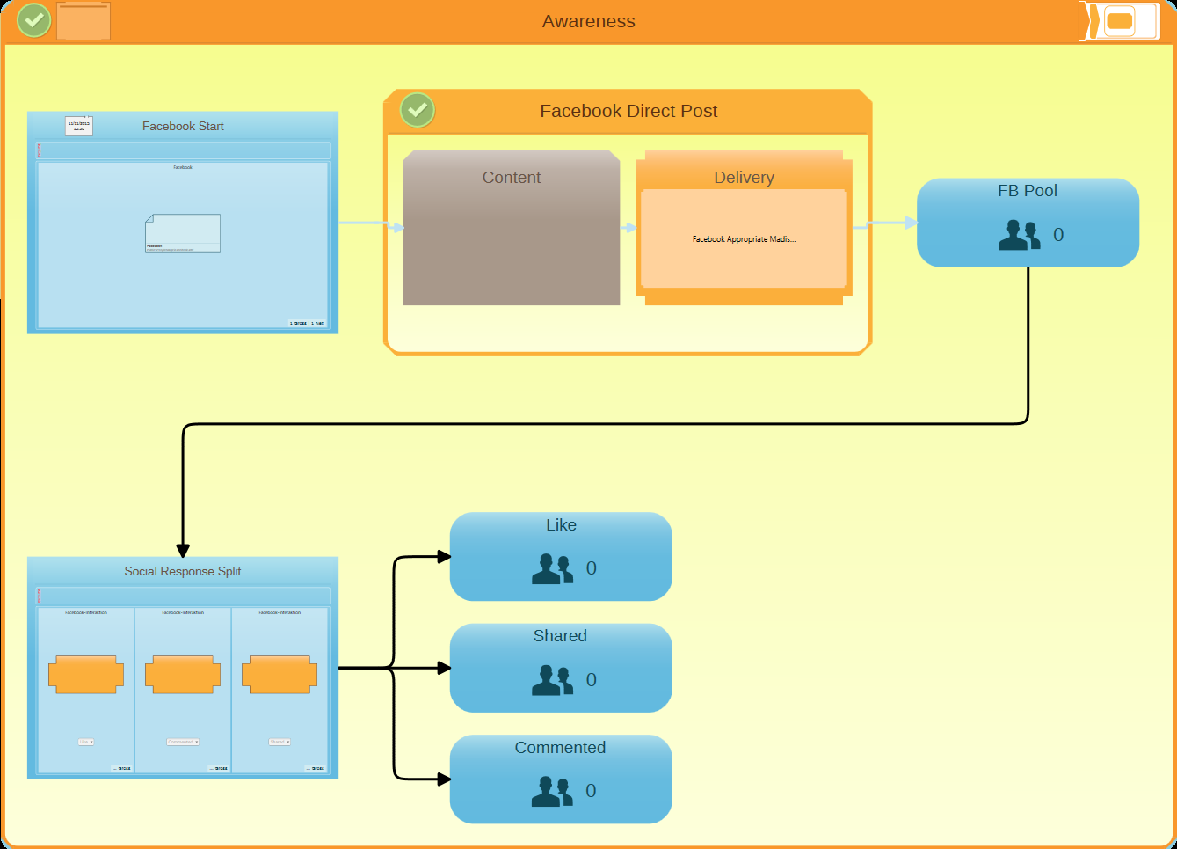 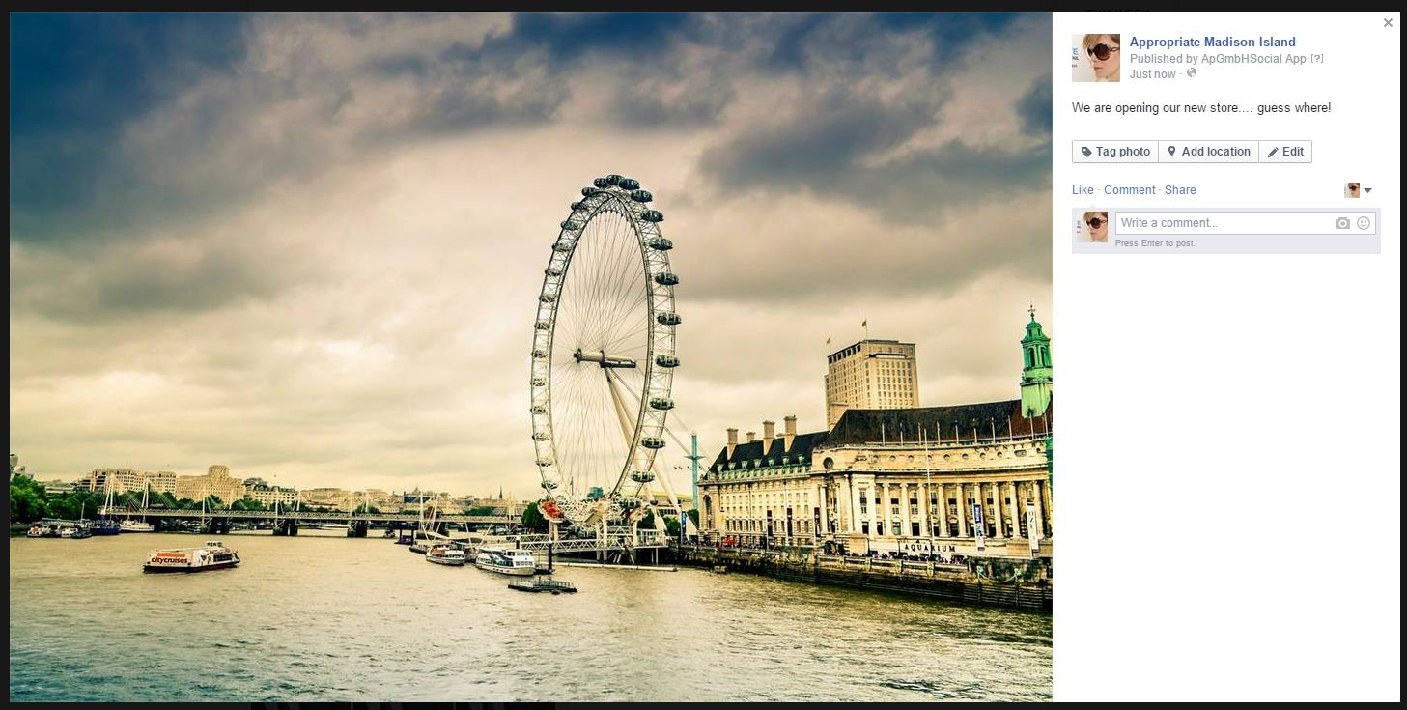 In the second step, the fashion retailer analyses its customer and prospect database. Based on a 20 mile proximity to the new store location, they select the right audience for a postcard mailing with an introductory discount voucher. In order to reduce mailing costs, there must be a minimum of 20 people in a pool before the agency creates and sends the mailing. This selection process can run on a regular basis (e.g. daily) in the run up to the store opening date. 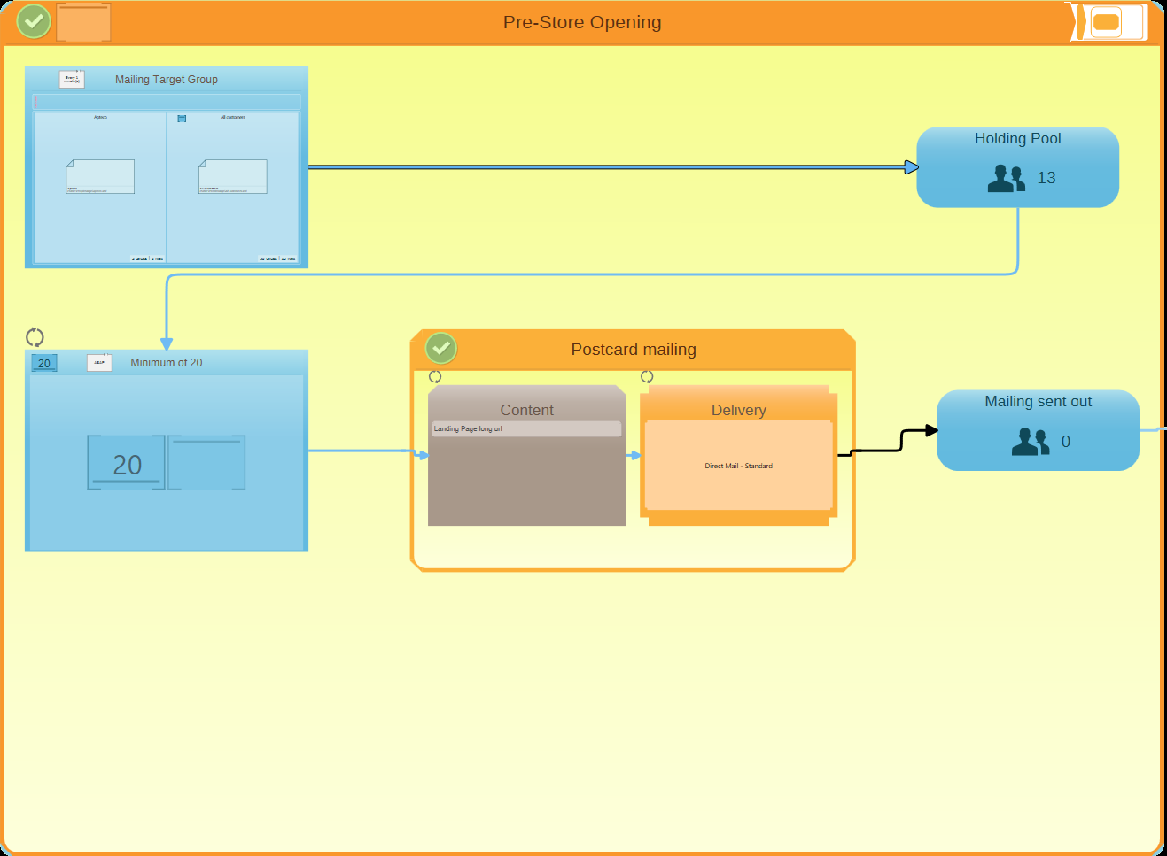 The people that are selected receive the postcard mailing with a personalised link to a landing page to claim their introductory discount voucher. The landing page is pre-filled with their details. The campaign tool creates a shortened personalised link by calling an external webservice with a longer link name. Via a so-called ‘communication key’ (created with each communication output from the campaign) it is possible to link responders to specific communications, here for example, it is used to link downloadable voucher codes to individuals. 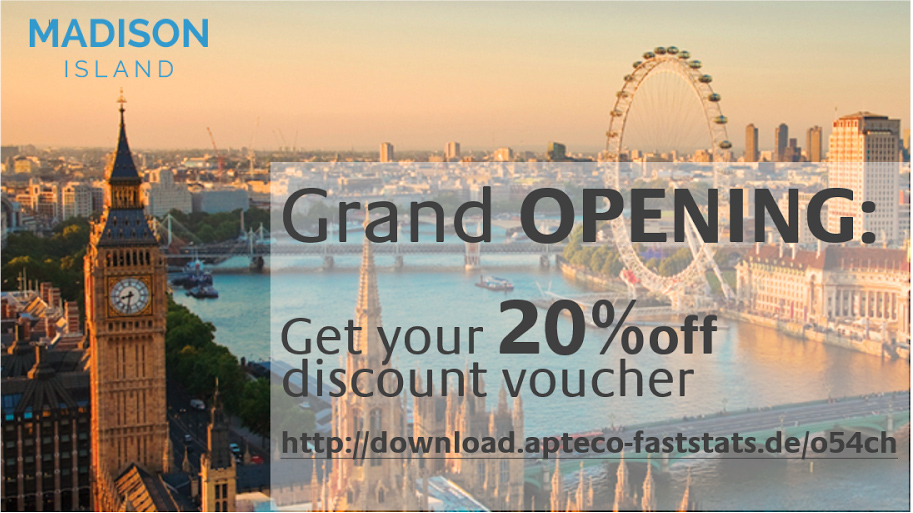 The big day has finally arrived and Madison Island opens its doors for the first time at the new location.

Via iBeacons, customers who enter the store (and have downloaded the store app in advance) receive a personalised mobile push notification on their smartphones, welcoming them to the store. This message is triggered by the interaction of the iBeacon and the smartphone using the so-called “Live Data” (i.e. near real-time) capability in the campaign tool. Customers and prospects who didn’t have the time to visit the store on the opening date receive an email with an introductory offer for the online store. Here you see the delivery step that splits people into two groups, in-store (receive mobile push notifications) and the rest (receive emails). 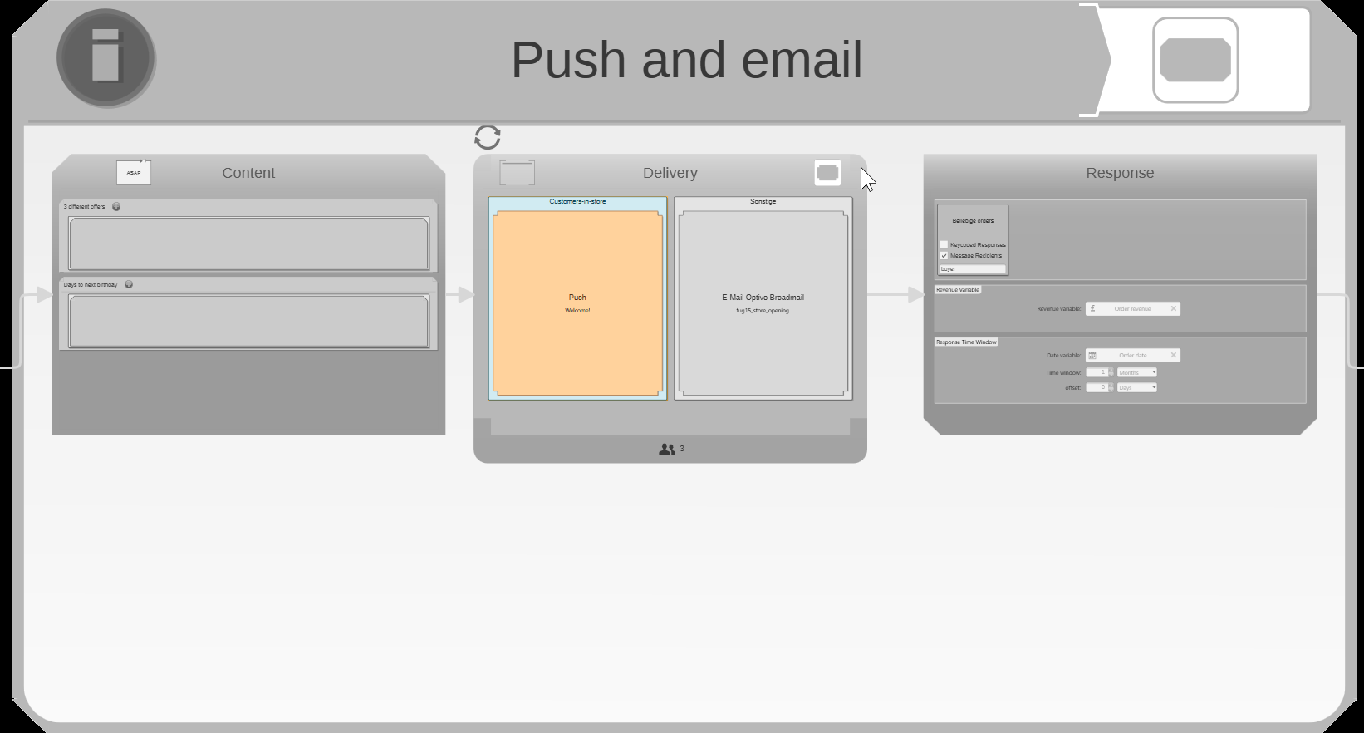 Many visitors make it to Madison’s new store opening event. When a customer enters the store, the campaign tool is informed that a registered person is nearby. This person receives the notification on their mobile phone (see below). The big advantage here is that the message can be tailored to the individual based on any relevant information stored about them on the CRM system. Personal preferences, size and store card information can be integrated in the notification message. 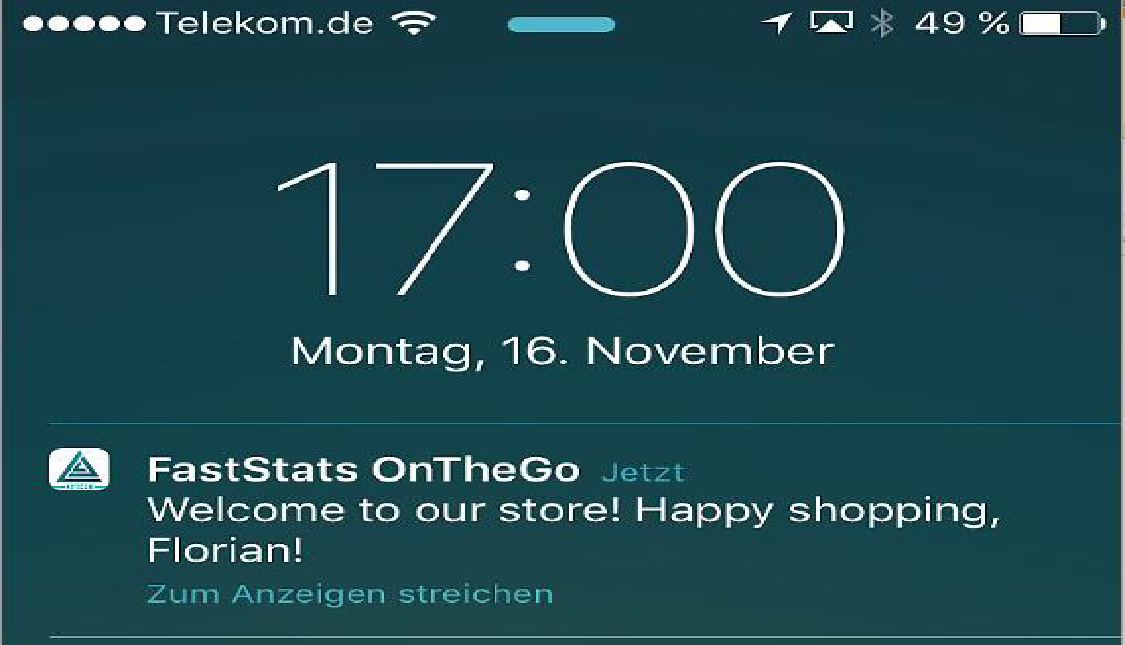 The campaign also offers a sub-segment of the initial target audience the opportunity to participate in a prize-draw. With A/B tests and control groups, it is possible to measure the effectiveness of the offers and to measure the overall success of the campaign (perhaps useful for future store-openings that Madison plans).

The new store opening was a great success. In order to keep up the dialogue with the target audience, the marketing team plans a personalised follow-up message. This takes the form of a three-way behavioural split. Customers who bought something receive an SMS message: ‘A special thank you is on its way’. Those that clicked on the email, went to the online store but abandoned their shopping cart receive a win-back email (e.g. with an incentivised coupon). People who haven’t responded or interacted within a two day timeframe also receive an email with a reminder message and incentivised offer.

Here you see the three-way behavioural split in more detail: 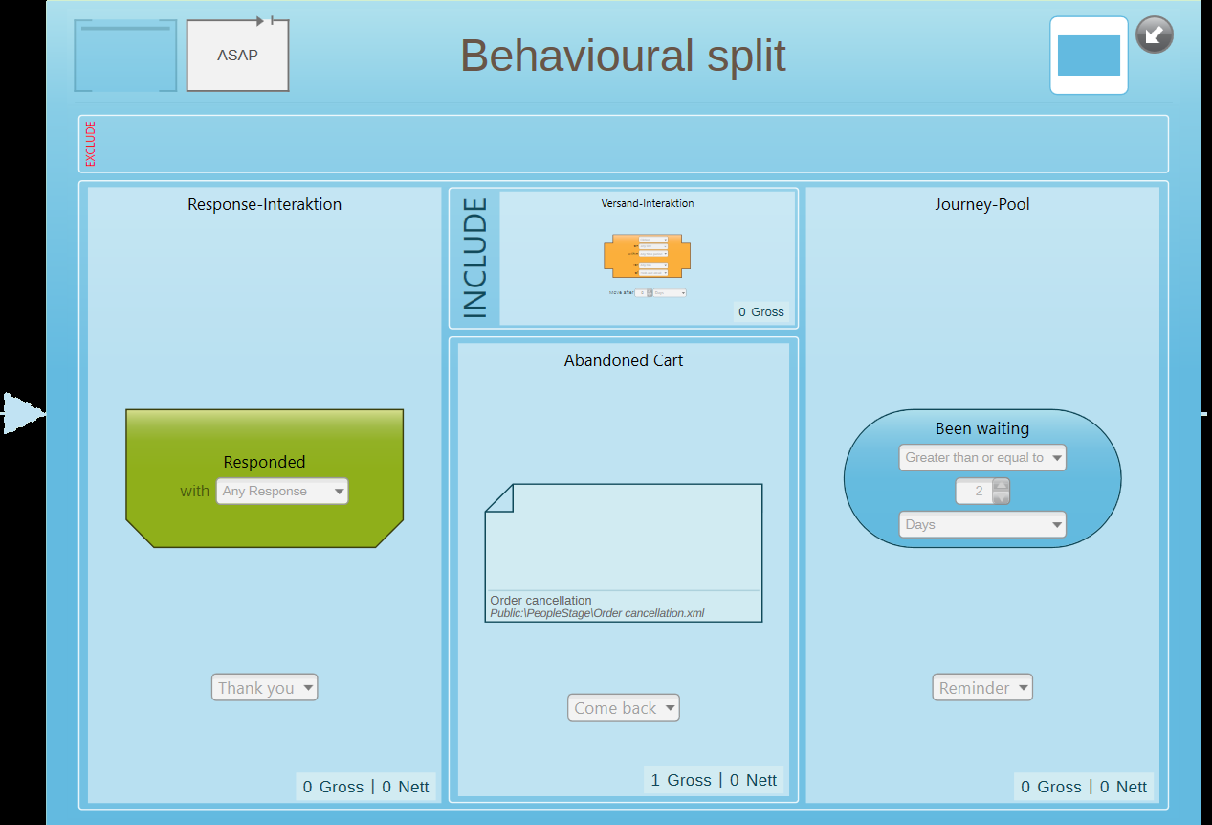 Naturally it is critical to measure the success of the campaign! The Madison Island marketing team look with satisfaction at the results of the store opening campaign. Based on a simple (Open Source) dashboard, one can see all the KPIs at a glance. This dashboard was created from data delivered via the FastStats API.

If other 3rd party tools are integrated with the campaign system e.g. web-tracking tools, further information can be used to optimise the campaign and for measurement purposes (e.g. using the communication key to track who visited your online store as a direct result of an email received). 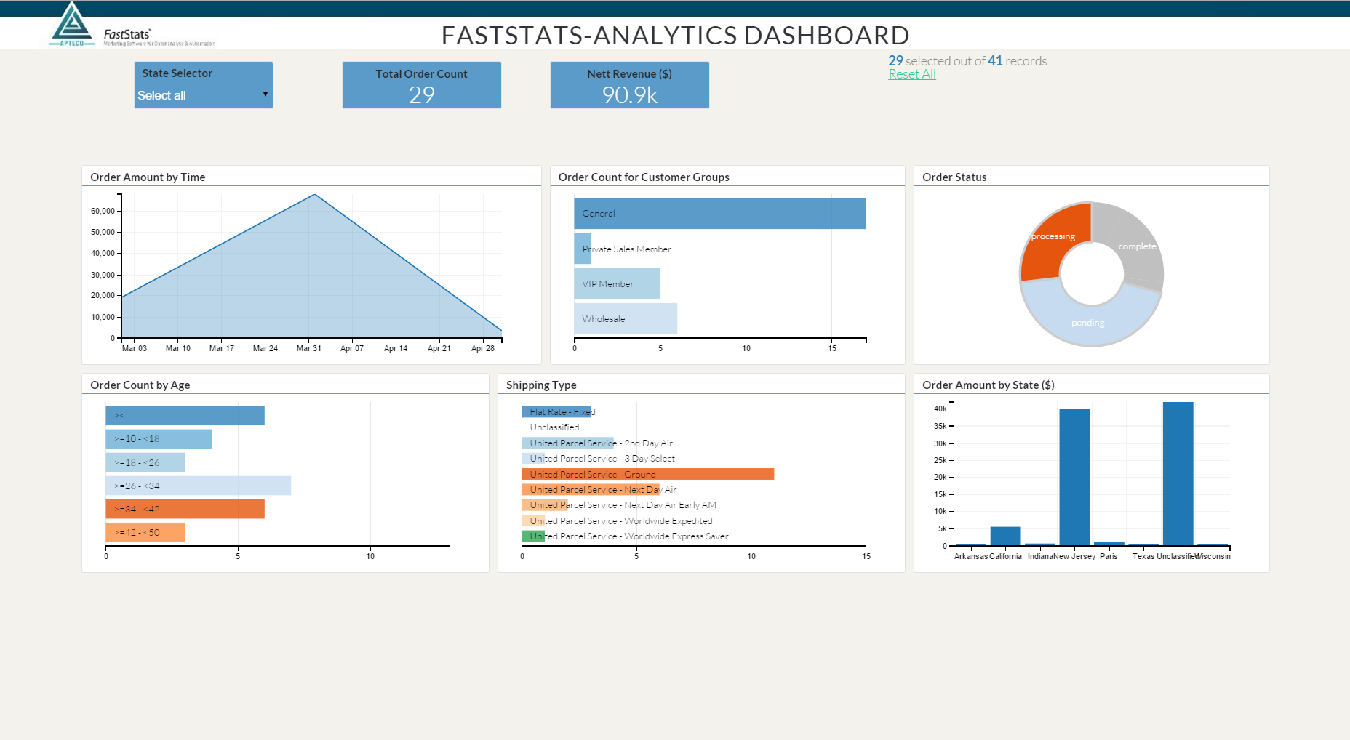 With more than 20 years of experience in the data, technology and marketing environment, Martin Clark is an expert in data-driven marketing. As managing director of Apteco GmbH, he is responsible for the expansion of Apteco in the DACH-area. Under the motto "Insight into Action", Apteco helps companies to strengthen their customer loyalty with analytical insights, to inspire customers through personalisation and to convert them into loyal fans along the customer journey.